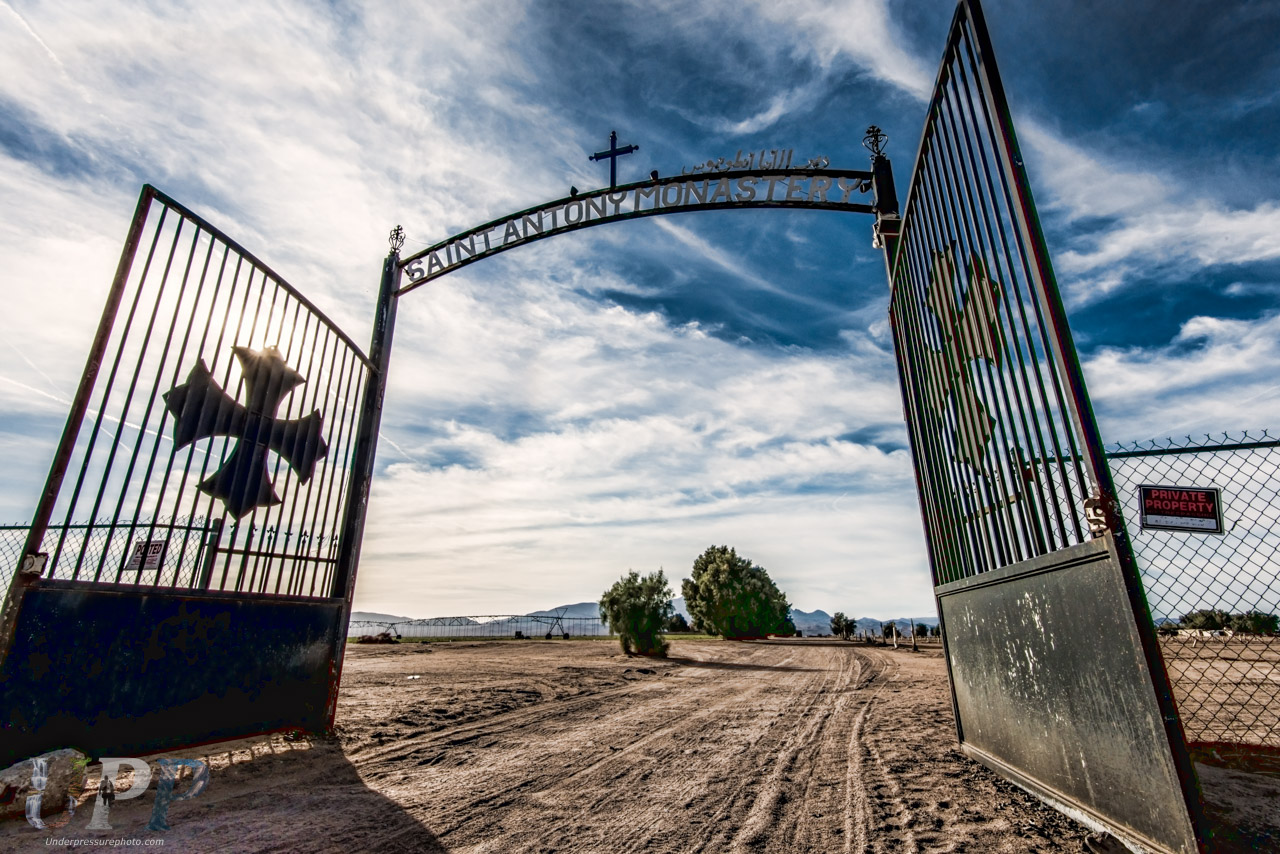 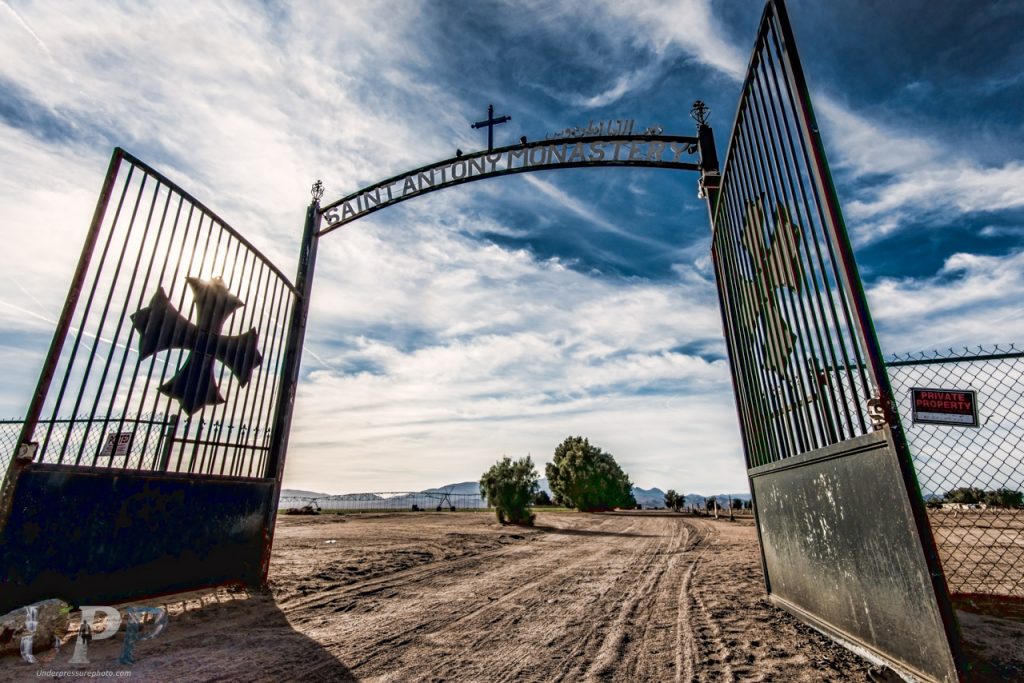 The intimidating gates at the entrance to St Antony’s Coptic Monastery in Newberry Springs, CA.

On our way back from the Rock n Roll half marathon (our first one!) in Las Vegas in 2013, CrtrGrl and I took a random exit in the desert in order to check out an abandoned water park. One of my side projects has been photographing abandoned or decaying structures. Right off the freeway, we saw a sign for St Antony’s Coptic Monastery and decided on a whim to head there first. 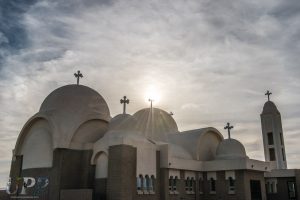 The sun sets over the church at St Antony’s Coptic Monastery. It looks like something you’d find on Tatooine.

Two miles out a dirt road, we left civilization behind. There were a few scattered hovels along the road with piles of abandoned junk in between. As a result, we wondered if it was still a good idea and whether we’d be welcomed. We cracked a joke about being invited to dinner, not being sure if we’d be the meal. Dark humor, it’s what we do best. Then we were passed by a fast moving UPS truck. It was a good sign that we weren’t completely off the grid.

Shortly, we came to the monastery front gate. It was wrought iron and painted black. On one side of the gate was a sign warning that it was private property and trespassers weren’t welcome. On the other side was a sign welcoming us to St Antony’s Coptic Monastery. I took some photographs of the open gate, unsure whether we should drive into the fenced compound. 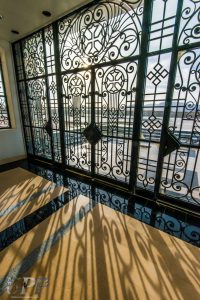 Seeing that the UPS truck made it out of the compound unscathed and knowing this was an opportunity for a unique experience, we decided to be brave and slowly drove through the gate. After passing fields of crops, we saw the new church that they had built. It looked like something that belonged on Tatooine, though unfinished, surrounded by dirt and with a newly paved parking lot. We debated whether to stop and take pictures or seek permission first. Wisely, we continued on, looking for someone to ask.

Further into the compound, we came to some administration buildings and saw a man with a long beard in black robes and a black hood… on a cell phone. That was another good sign. I went into the bookstore seeking permission, not really knowing what the Coptic Orthodox Church was about (was it a cult?) or whether women were even allowed at the monastery. 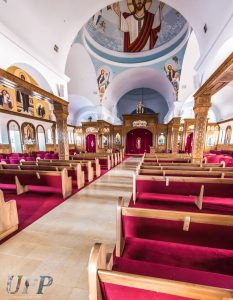 The main sanctuary inside St Antony’s Coptic Monastery, looking toward the dais.

Inside the bookstore were two customers of Middle Eastern descent – a man and a woman. At least one question was answered. The bookstore clerk was also Middle Eastern. After he finished helping the couple, I shyly asked if it would be OK if I took some pictures of their church. He said he would need to ask the head father first. I hesitated, not wanting to get in their way or be rude, then agreed.

Fortunately, the head father was just outside talking to the couple that had been in the bookstore. He asked what I wanted to take pictures of. I told him, “Just the outside of the church”. I waited, cringing, waiting for his response. Then he smiled warmly and said that the inside was much more beautiful and that we should let ourselves in.

I walked back to the truck where CrtrGrl was waiting on pins and needles. As I was giving her the good news and we were pulling out of the parking lot to head back to the church, the bookstore clerk walked over to the truck. I thought to myself, “Uh oh, here’s where we find out that we’re not welcome”. Instead, he told us that they were having dinner at 5:30 pm and invited us to stay and sup with them. It was around 2 pm at the time and we were tired from running the half marathon the day before.

I politely declined the offer for dinner, but in the back of my mind, I knew that dining with orthodox Coptic monks would be a real learning experience, still not sure what religion they were. CrtrGrl and I were both struggling with how much of an opportunity it was, a bit scared for what it would entail, but not really wanting to hang out for 3 hours with a long drive still ahead of us. 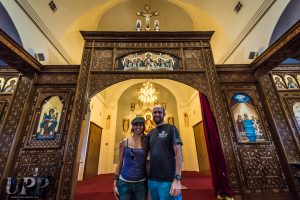 We drove back to the church and I started photographing it from the outside. Behind the church, we found the dedication stone to Father Moses the Black (a desert father), after whom the church was named. Next to it was a tree with notes stuffed into the bark and branches. We found an unlocked door on the side of the church and let ourselves in.

In the first room we entered, we found the baptismal font with a beautiful tile mosaic. The room was still under construction and being used for storage. Based on this room, we assumed we’d be able to explore the unfinished church on our own. We proceeded to the main entrance and the quad wooden carved doors to the main sanctuary. As we opened the doors, we were taken aback at the completed and fully decorated church inside. It resembled a Catholic Church with two rows of pews, a central dais and murals adorning the walls. I opened two of the doors in order to let in some natural lighting.

While we were looking into the main sanctuary, I noticed a car pulling up into the new parking lot outside. In comes the head father, dressed in all black robes, black hood and a long, peppered, gray beard. Concerned that we had done something wrong, I approached him and thanked him again for letting us photograph their beautiful church. Then he invited us into the main sanctuary.

He introduced himself as Father Anastasi, smiled warmly and asked us if we would mind telling him what our religious background was. I smiled hesitantly and said that I was raised Presbyterian, but that I was now an atheist. Consequently, he looked slightly taken a back, then smiled, laughed heartily and gave me a hug. He asked CrtrGrl the same thing and she responded that she was raised Catholic, and hesitantly said that she was also an atheist. He gave a friendly smile again and laughed. 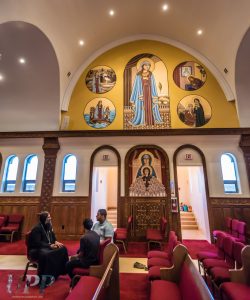 We spent the next two hours with Father Anastasi. He explained that the Coptic Orthodox Church was one of the original Christian churches, similar to the Catholic Church, the Greek and Russian Orthodox churches, but they were the orthodox church in Egypt. For CrtrGrl, he explained the nuanced differences between the Catholic Church and the Coptic church. We talked about faith and evidence, toeing the line between being open and asking hard questions, not wanting to be rude as a guest in his house. He explained that as monks, they take a vow with three parts – poverty, chastity and obedience.

After taking off our shoes, he took us up onto the dais. He told us the stories behind all of the murals and the symbolism in them. Two young men joined us in the church and followed us in our conversation with Father Anastasi. They were considering becoming monks and were excited just to have time with him and hear him speak. We never felt like he was preaching to us. It was more of an exchange of ideas.

Around 4 pm, he realized that we might need to get on our way home. As the daylight was waning, he offered to turn on all the lights inside the church and let us take whatever photos we wanted. He invited us to come back some time and stay at the family retreat they have a couple of miles away. Last, he asked if we wanted him to take a photo of the two of us in the church. I showed him the shutter button and a few pointers and he took a couple of good photos of us. I gave him my business card and he wrote down his name and phone number for us. 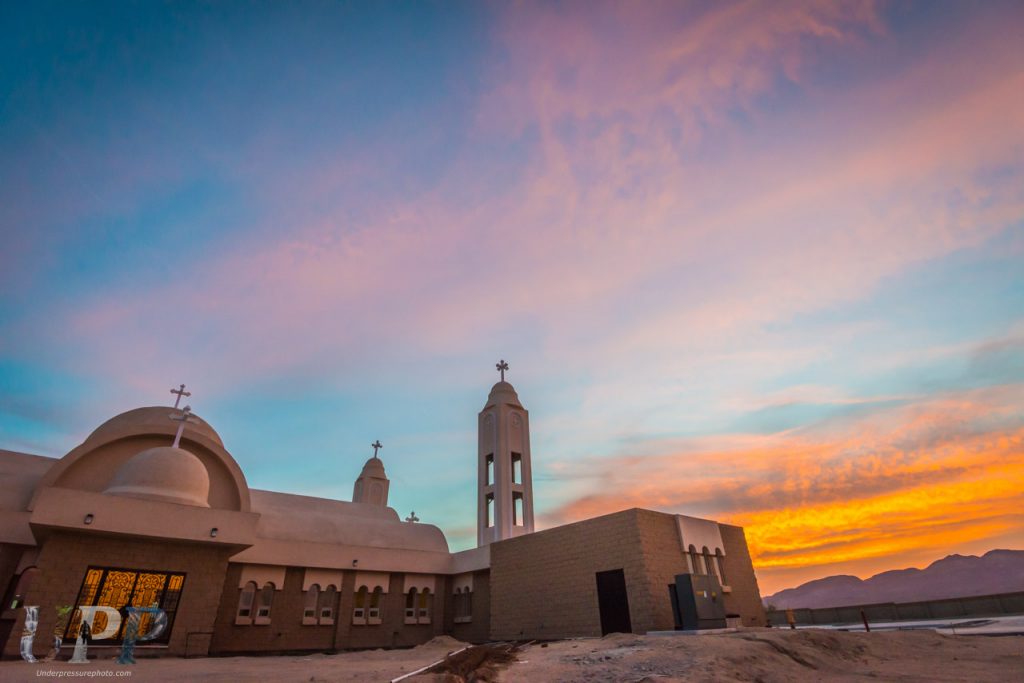 The sun is setting as we leave St Antony’s Coptic Monastery.

After taking our pictures, we heartily thanked him and left. On the way home, we talked about what we’d learned, how humble Father Anastasi was and what a great experience it was. We were thankful that we’d overcome our fears and driven through that open gate. We talked about making a trip back out and staying at the retreat. Some of the best experiences (and photographs) come from exploring and being open to the possibilities.

In the comments below, please share a positive experience you had only because you overcame your apprehension and fear!